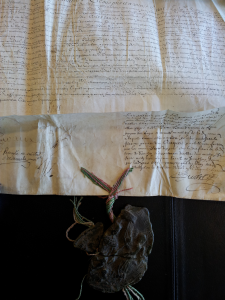 It has two wells and a pond and early settlers would have appreciated the supply of water and its natural fortifications.

In a document  dated 1212  (now lost but copied in 16th century ) at the height of the Cathar wars, it was linked to the neighbouring village medieval village ‘Sanches’; in the early 18 th century Louis XIV granted Domaine des Jasses to the Ursulines nuns,  provided they prayed daily  for him and his family. These Letters Patent of King Louis are reproduced here by kind permission of the Archive Department of Carcassonne.

For several hundred years the domaine remained a convent of the contemplative order of Ursulines . With the Revolution much church property fell into private hands including Les Jasses which was extended by M Vidal in 1844  into what you see today. 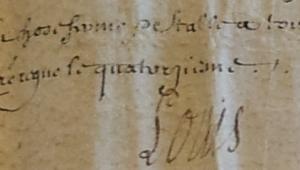 There is a line of sight view of the walls of the chateau de Montsegur in the foothills of the Pyrenees where in 1244 over 200  cathars chose death in an auto-da-fe rather sign on the dotted line saying that the only true faith was Rome.

The house is the  residence of an artist www.murphygallery.com and holds a varied art collection gathered over a lifetime.

The owner, artist Anthony Murphy, has a studio in the wing of Domaine des Jasses. You can view his work on www.murphygallery.com He writes:

My uncle Richard Murphy became a poet and although I was taught at Westminster and Oxford to become first a barrister,then banking lawyer at Clifford Chance , it just wasn’t me . I had won an Emmy as Tom Brown in the BBC’s 1970 production of Tom Brown’s Schooldays so I knew there were less respectable careers to be had . I abandoned my desk in Paris and headed South to try my luck . Domaine des Jasses entered my life and our partnership continues to this day. My sculptor friend, Brian Wall, from San Francisco says you can see its influence on me in my work. Long may it last. I have to travel alot putting on exhibitions . I have three studios ; one in the wing which you are welcome to visit ; one in London and one in Ireland . My children are nearly all grown up and so I mainly just paint for all I am worth. The Cathar movement, which was local here, still holds my interest as do the medieval ruins everywhere. At Jasses there still exists ‘old France’ where one can look down the tunnel of time to the old world and be left free to dream in this still wild and remote place. 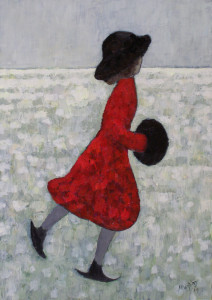 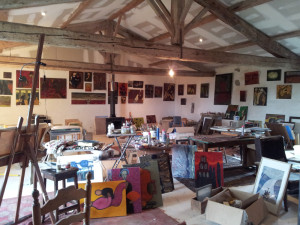